Here are 10 ideas for using the elf on the shelf in your classroom.  Some of these you may have already seen on the Facebook, but I thought I’d include them for any new readers of my blog.

I’ve included a possible writing hook with each scenario as they often really lend themselves to encouraging writing and mark making.

Writing hook: Leave out the large road signs or suggest that the children write posters to the elf telling him to stop making such a mess!

Writing hook: Leave pieces of paper and sellotape nearby for the children to write signs and posters telling the dinosaurs to leave the elf alone.

If you follow me on Facebook you’ll remember the little elves I bought in Tiger. I think they look so sweet in my elf school.  The children actually squealed when they discovered them this morning! 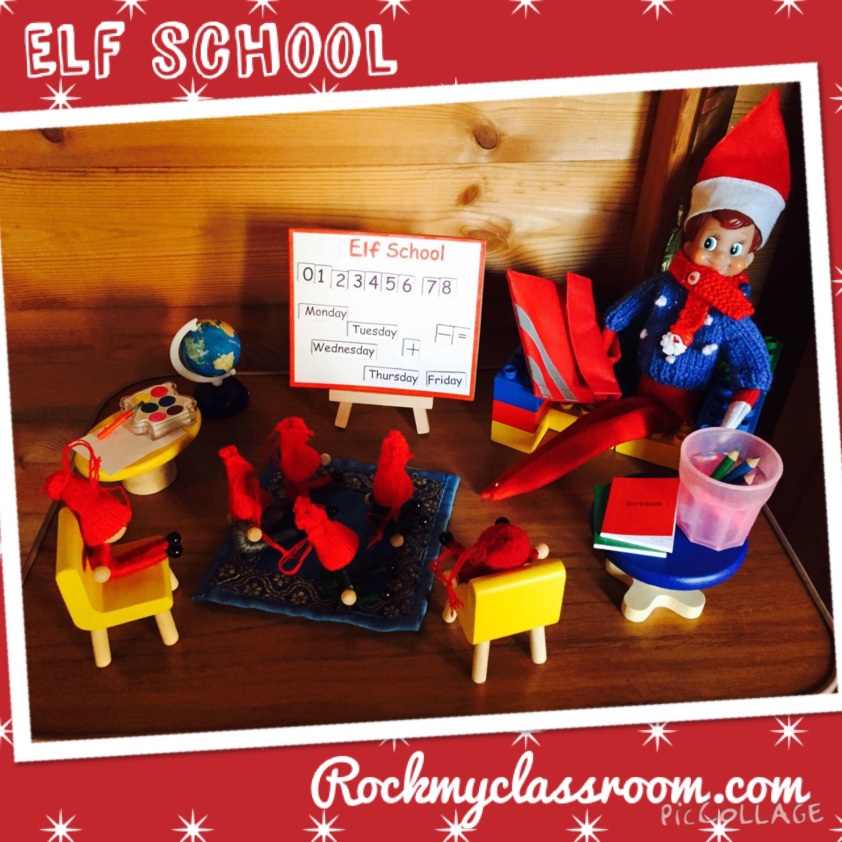 Writing hook –  The children already spend the day re-enacting the school day in their ‘school’ role play area and didn’t need any prompting to start teaching the elves the sounds they have been learning. One of the boys even started writing the school rules on the board!!

Writing hook: Usually the children suggest this before I do, but even so, make it easier for them by leaving some cards laid out on the table as a prompt.

Writing hook: I left some name cards in the tuff spot to encourage the children to come and write their names and other letters in the salt.

7. Toilet paper the outdoor area/block off the door with tape

Writing hook: As above, Leave out the large road signs or suggest that the children write posters to the elf telling him to stop making such a mess!

8. Invite to make reindeer food and write a recipe

Writing hook: the recipe templates that have been left on the tuff spot. I’m going to encourage the children to write out the list of ingredients that they used to create their reindeer food.

Really sorry but I forgot to take a picture of this! I set up the elf holding a big piece of chalk with the words ‘Hi Santa’ written on the ground. I encouraged the children to have a go at writing big words on the ground so that Santa would be able to see them from the sky!

There you have it, 10 ideas for using your elf in the classroom and encouraging some writing while you’re at it!

Only 3 more get ups people, we can do this! This will be my last blog post until the New Year. I hope you all have a fabulous, peaceful and restful Christmas.