An early years advisor I was talking to recently said that she had a group of NQTs who weren’t confident about teaching phonics, so I thought that I’d share a typical phonics session with you this morning, to hopefully inspire you NQTs out there!

I started teaching phase 2 sounds this week. I follow the letters and sounds guidance in conjunction with Jolly phonics visuals, actions and songs.

I use a turtle hand puppet to introduce our phoneme each day. The turtle feels a bit shy at the start and hides inside her shell. The children chant..

‘Tina turtle, Tina turtle, what’s our sound?
Come out, come out, so that it can be found..’

The turtle then pops her head out with a phoneme card and jolly phonics sound button in her mouth. One of the children then presses the sound button so we can all hear it.

When I taught P this week I changed things around a bit. I put a happy birthday badge on Tina and left the children a note explaining that it was Tina’s birthday and that they had to open up her presents to look for clues about that day’s phoneme.

Lo and behold, all of the presents started with a p – penguin, polar bear, pizza etc etc.

From under a piece of pink fabric I then revealed a peppa pig cake and some pink birthday candles (linked to the jolly phonics action).

I then modelled how to write the letter and got the children standing up to do large scale air writing and then to write on each other’s backs. For the more able children I encouraged them to write the words pin, peg etc on their friends back.

The children then sat down and I ‘noticed’ another present wrapped in shiny pink paper. Attached to it was an envelope. I got one of the more able children to come up to read what the letter inside said. It said ‘turn on the board and read the words to guess what this present is.’

On the board were the words ‘postman tap’. The more able child read the word postman and then the class had a go at sounding out the word tap.

Realising it was the wrong word, I asked the children to turn to their talk partners and have a go at segmenting the word pat.  I then chose a child to come up to the board and rearrange the letters to spell the the word pat.  Finally I opened the last present which turned out to be a Postman Pat DVD!

We then lit the pink candles on the cake and sang the Jolly phonics song..

The special helpers then blew out the candles. After that I reviewed the letter sound once more. The lesson took about 15-20mins in all.

The children then had a wee slice of the cake and went completely bonkers because of the sugar rush!

That afternoon we set out pink paints and encouraged the children to practice writing their new sound. The more able children had a go at writing simple CVC words beginning with p.

At the end of the day I put on the postman pat DVD and let them watch one episode.

Last year we made pizzas in the afternoon, but we didn’t have time this year, but this is something else you might like to do.

I believe that with each sound, you should try to give the children an experience to help them remember it. It can be as simple as you like e.g. My TA and I played a game of tennis across all of the children’s heads when I taught the sound T. With the amount of giggling that went on I definitely think that sound will stick in their heads.

Towards the end of the week I put an initial sounds sorting activity out on the funky fingers table….

I hope this gives you some ideas for your phonics sessions. Best of luck!

Yay, it’s almost half term and we’ve survived the first few weeks of settling in and the general madness of being back at school!

This year I did a Halloween theme for the first time ever. In the past I’ve always been afraid of upsetting certain parents, but seeing how into witches and potion making some of my Muslim girls were last year, I decided to go for it!

We focused on the Julia Donaldson book, room on the broom, which is full of rhythm, rhyme and repitition and is perfect for phase 1 phonics.

I am a firm believer in not introducing phase 2 letter sounds too early in reception. I feel that it is imperative that children are exposed to plenty of phase 1 rhythm, rhyme, alliteration and blending and segmenting games, in order to build up a solid base and an ear for sounds.  In our objective led planning this week our literacy focus has been blending and segmenting sounds in words. We set up a silly soup activity outside with lentils, beans and CVC word objects….

Later in the week we transformed our outdoor playhouse into a witches hut…. 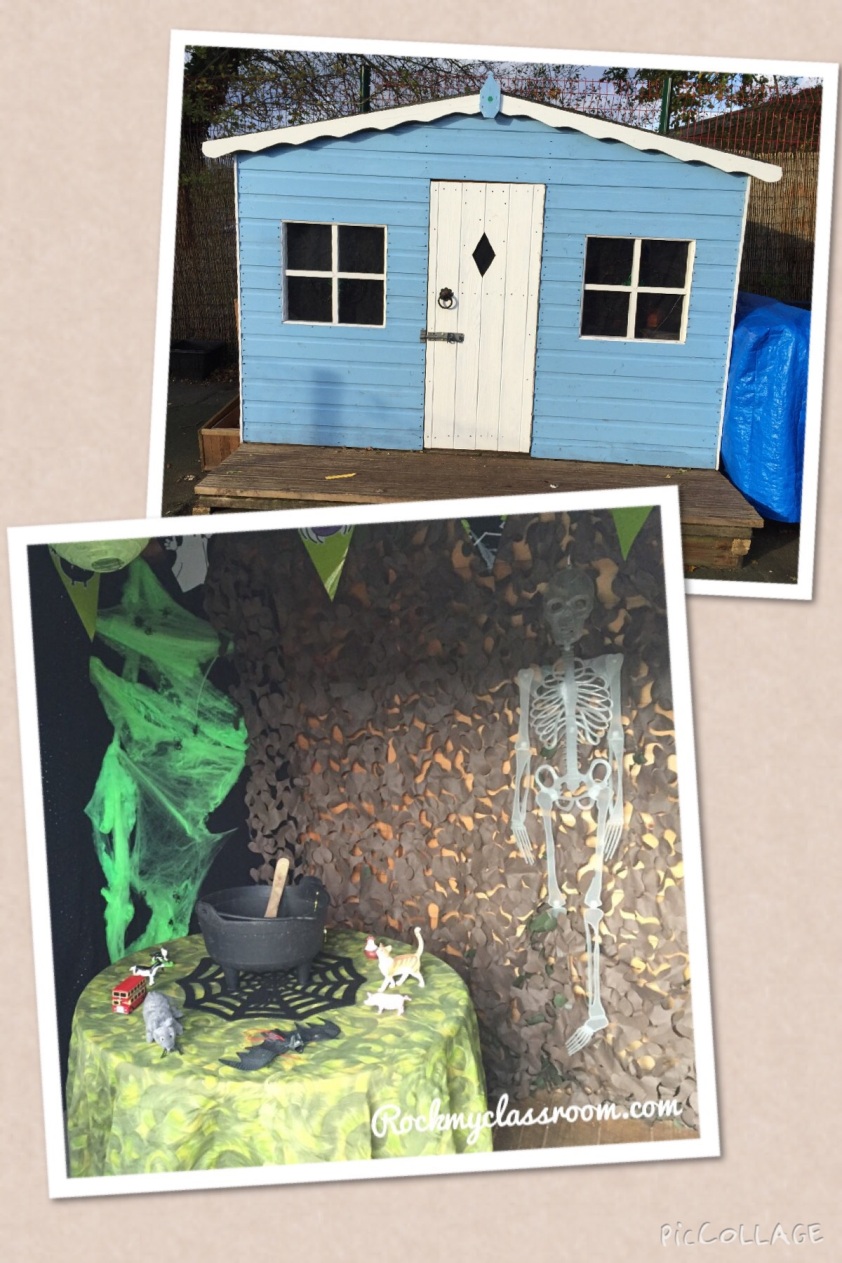 In it we had our silly soup cauldron and some CVC word objects. In the other corner we set out the props from the room and the broom story as well as having the book and picture prompts on the wall. We also filled our little ikea storage wall hanger full of pens and writing frames..

Our numeracy objective this week was for the children to count out a set amount from a larger group. I modelled this activity at the carpet and then set it up in our water tray which was filled with gelibaff and cauldrons. The children had to pick a number card and place that many items into their cauldron. They LOVED the gelibaff and asked if they could have it out everyday!

On on our funky fingers table I vagazzled some skull shot glasses that I bought in good old poundland and the children had to fill them up accordingly with spiders of varying sizes. Again differentiated tools were provided.

The following week I set this funky fingers activity up in a tuff spot outside with green gelibaff. The children were thrilled!

That’s all for now folks. I hope you all have a wonderful and restful half term. ❤️